Running north-south through Lincoln is a limestone escarpment that represents a northern continuation of the Cotswolds. Harmston sits on the scarp 5 miles south of Lincoln. It is unusual to find villages perched on a scarp like that but there is a whole line of them from Waddington to Wellingore. The reason is that the highest point of the ridge is actually about a mile back from the scarp; rainwater soaks through the limestone and is trapped by a layer of clay immediately beneath. Enough drains westwards to produce a line of springs almost at the top of the scarp. Having well-drained ground adjacent to a spring made for an ideal settlement site. 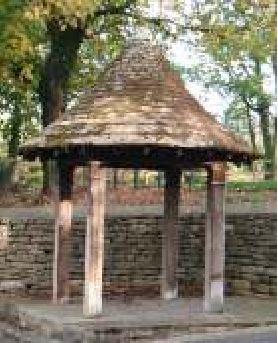 Harmston's street-pattern, like Waddington's, consists of a High Street running parallel to the scarp, a road called Hill Top right on the scarp, and a number of closely-spaced lanes connecting the two. There was also medieval settlement along Church Lane east of the church, but that seems to have been a 12th c. or 13th c. extension of the village. Most of the peasant farmsteads lined the lanes and were quite small in comparison to other villages: generally about 600 sq.m. Some of these tofts, as they were known, survive as modern property boundaries: the north side of Chapel Lane has several examples. 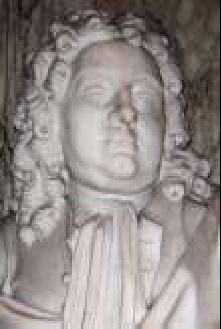 The principal manor was held in 1086 by the Earl of Chester, a great magnate. By 1154 it had been subdivided: the greater part was held by the Mohaut family, who were Constables of Hawarden Castle. It is unlikely that any of these ever visited Harmston. By the later middle ages, their manorial rights appear to have been leased by prosperous peasants. Some of the other land was acquired by monastic houses: St Katherine's outside Lincoln, and Thurgarton Priory. Manor Farm is the descendant of one of these monastic manor houses.

This principal secular manor was acquired in 1557 by William Thorold of Hough and Marston, who settled it on his second son. Three generations of his descendants became increasingly wealthy through financial business in London. Sir Charles Thorold (1655-1709) bought out most of the other landowners in the parish and started to build the present Harmston Hall; on his death, his younger brother Sir George completed the house and spent each summer in Harmston except for 1720, when he was serving as Lord Mayor of London, and 1722, the year of his death. He also rebuilt the church, except for the tower. 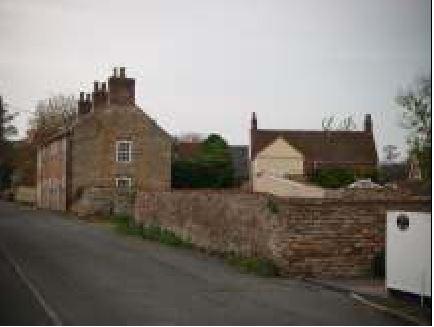 Tightly packed cottages next to a former stack-yard

The estate remained in the Thorold family until 1891. They bought up most of the remaining land in the parish; however, Samuel Thorold (1749-1820) bought land but did not buy the associated farmhouses in the village. Samuel Thorold also greatly reduced the number of cottages he provided for labourers – principally because he found it so difficult to collect rent from them. In consequence, many of the farmhouse sites he had neglected to buy were developed by their owners to provide cottages. Thus Harmston acquired a distinctive character with tight clusters of cottages surrounded by the paddocks and stackyards of the tenant farmers. One of the best surviving examples of this is at the corner of High Street and School Lane.

The nineteenth century saw various improvements. About 1830 the road up Harmston Hill was re-aligned as a zig-zag to reduce the gradient. A National School was built in 1851 and remained open until 1983. The Grantham to Lincoln railway opened in 1867 with a station at the bottom of the hill. The station was closed in 1962; the passenger survey before closure recorded an average of 1 passenger a day departing from Harmston, with none at all arriving. Evidently people preferred the buses. Trains continued to pass through Harmston until 1965. 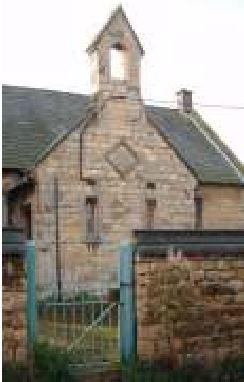 The estate was sold in 1898 to Nathaniel Clayton Cockburn, a grandson of Nathaniel Clayton, the Lincoln iron founder. He greatly enlarged the Hall and was an enthusiast for new technology: by 1907 he had his own electricity supply, a motor car, and a telephone2. He attained the rank of Major in the Imperial Yeomanry and served in the Palestine campaign during the Great War. On his return he gave the Memorial Hall in memory of the Harmston men who had lost their lives in that conflict. He died in 1924 and the Hall was occupied by his sister before being sold to the Lincolnshire Joint Board for the Mentally Defective, who opened it in 1935 as a 'Colony for Mental Defectives'. One unfortunate consequence of this was that the ancient footpath from Harmston to Coleby was diverted to run via the main road.

In due course, the Colony became a National Health Service hospital, and wards and other buildings spread over former parkland. It closed in 1989 and the site became increasingly derelict until it was bought in 1996 by Peter Sowerby, who restored the Hall and built houses over the rest of the hospital site. The effect was to more than double the population of the village.

1 The parish boundary interlocks with Waddington, and Domesday Book records Waddington's rights of soke over Harmston. But Harmston was certainly a separate entity when liability for geld was allotted.

2 It was linked to the railway station and made use of the railway's own telephone system to connect to the wider world.